The U8’s traveled to Castleisland for a blitz with the host club and Killarney. We had 2 teams taking part and both teams did really well scoring some great tries. Our boys and girls continue to improve with tackling and passing getting better every week. Well done to all and thanks to the parents who came to support and Castleisland for all the lovely treats after.

Our U10’s Navy team had two games yesterday in Castleisland as part of the West Munster Blitz. Captains Karen & Daniel M led their teams well with Karen getting two great tries against a strong Killarney side. Fair play to Jack & Darragh who joined Killorglin from Killarney RFC for this game and played so well for us.
The team kicked up a gear against Castleisland with some brilliant tackles from Daniel M & Noah and scores from Caitlin, Ronán & Charlie. Eddie was unlucky to just miss a try having been brought down at the touch line. Great team support from Jack, Daniel C, Evan & Luke. Well done all!

Team blue performed very well in Castleisland last Saturday.  Nearly all the players scored a try. Caoimhe linked very well in the centre and was very unselfish in her work.  Harry, Patrick, Cormac, Eugene, Mikey, both Conors, Sean, Daniel and Myles all touched down.  Isabelle got try of the season when she beat 7 defenders in a 30 metre run to the line.  Overall this was a great team performance with rucking, tackling and passing all improving throughout the day.

Thriller at Ballymallis finished 24 all. This means both teams remain undefeated.
The game featured a strong Killorglin pack trying to out muscle a young smaller team from the West who sought to move the ball wide at every opportunity. RCD started stronger and a back strike move sent Donnachadh Brosnan over for a try. Killorglin fought back to maul over from a lineout with JP Courtney touching down. Killorglin were now dominant but smart play from Odhran Slattery led to an intercept and he offloaded to Jimí Fenton to score under the posts. Half time saw RCD leading the home team 14 10.

Killorglin started the second half very well and benefited from forward dominance to tries through Donnacha Crowley and Conall Whelan to take the lead for the first time. RCD struck back after a quick penalty which saw flying winger Daithí Baker touch down. Killorglin took the lead through Jack O’Leary with 5 minutes remaining.
However a great counter attack by Cathal Galvin supported by Josh Brennan led to a penalty on the 15m which Jimí Fenton converted to level the scores.
The last few minutes were frenetic with both teams turning over the ball as play swept from end to end.
Neither team deserved to lose and the contest served as a great advertisement for Kerry Rugby.
Best for the home team we’re Donnacha Crowley,Jack O’Leary Aoona O’Shea and Conall Whelan while Mikey Devine, Robbie Sheehy & Seamus Greaney impressed for the visitors

Killorglin/Killarney U18’s traveled to Musgrave park to play Sunday’s well on Saturday to try and build on last week’s win and they started off well when Jack Coffey intercepted a pass inside the opposition 22 and raced under the posts. Jack Evans converted for a 7 nil lead. Sunday’s well struck back straight away and it was 7-7 after 5 minutes.

Sunday’s well had the majority of possession for the next 10 minutes and came up with another 7 points to lead 14 -7.
this time it was the travelling teams time to strike back and they did so when after some very strong team play Cormac Doyle got over in the corner.  Jack Evans nailed the kick from the touch line and it was 14-14 after 19 mins. 5 minutes later Killorglin/Killarney were awarded a penalty 30 meters out which was again successful. The home team held onto the ball for the rest of the half and took advantage of poor tackling and scored two tries in quick succession, both converted. Sunday’s Well led at half time 28 -17.
The second half was a tighter affair with neither side wanting to concede an inch. Sunday’s Well did however get over for one more try when after a lot of pressure on the visitors line they got over out wide and left the score at the end 33 – 17. A tough trip on the road, the U18’s are out again away to Shannon on the 9th of February

A depleted senior team traveled to West Cork in their penultimate regular league game against a Bantry Bay who have been resurgent in recent weeks. Having won last week against Douglas/Carraigaline, Killorglin were looking to make it back to back wins in their attempts to make the league knock out stages. However, the home side burst out of the blocks with 2 quick tries. Killorglin replied when some good phase play saw Timmy Lynch breach the home side’s defense, Killorglin spread the ball wide and Kevin Courtney touched down to finish an excellent attack. A poor restart saw the away side cough up possession from the restart and shortly after concede a third try within 20 minutes and left the score 17-5 to Bantry Bay. The game could have easily have gone away from our boys but they stormed back into the game with another excellent attack which was finished by winger Neil O’Shea. Killorglin were really taking control now and, playing up the hill, piled the pressure on Bantry. After another multi-phase attack, captain Luke O’Shea spotted a gap in the defense and ran in under the sticks from the 22 meter line. He added the extras to leave Killorglin ahead at half time 17-19.
Killorglin picked up where they left off after the break and earned an early penalty which was converted by the captain. One felt the next score would be crucial and it was the away side that surged forward and up popped hooked Fionan O’Sullivan to burst through to grab his first senior try and extend Killorglin’s lead to 12 points and also secure a try bonus point. Bantry rallied and the Bantry out half and Luke swapped 3 pointers (penalty for Bantry and a tidy drop goal from Luke). An inevitable onslaught from Bantry came and they grabbed a bonus point try of their own with 4 mins remaining, leaving 5 points between the teams. It looked like Killorglin would play out the last few mins on the back foot trying to keep Bantry out but our experienced players stepped up and ensured Killorglin played out the remaining minutes deep in the Bantry half to close out a deserved 27-32 bonus point win.
This was a superb victory for Killorglin after a sluggish start but some brilliant attacking play led to some excellent scores. Resolute defending, led by centres Tom Healy and Darragh O’Shea and open side flanker Cian Foley, kept Bantry to only 1 try in the final hour of the game, a commendable effort. Special mention also to Andrew O’Reilly and Tom Healy who played through the pain barrier to put in huge shift for their side.
The final league game is against Ennis and a Killorglin win would see them qualify for the knock out stages. If they play like they did today (first 20 mins excluded!) they have every chance of doing just that.
Team: Kevin Courtney, Kyle Byrne, Darragh O’Shea, Tom Healy, Neil O’Shea, Luke O’Shea, Fionn O’Shea, Noel O’Malley, Fionan O’Sullivan, Tommy Moriarty, Timmy Lynch, Mike Breen, Michael O’Connor, Cian Foley, Andrew O’Reilly
Subs used: Stephen O’Regan and Rodi Healy 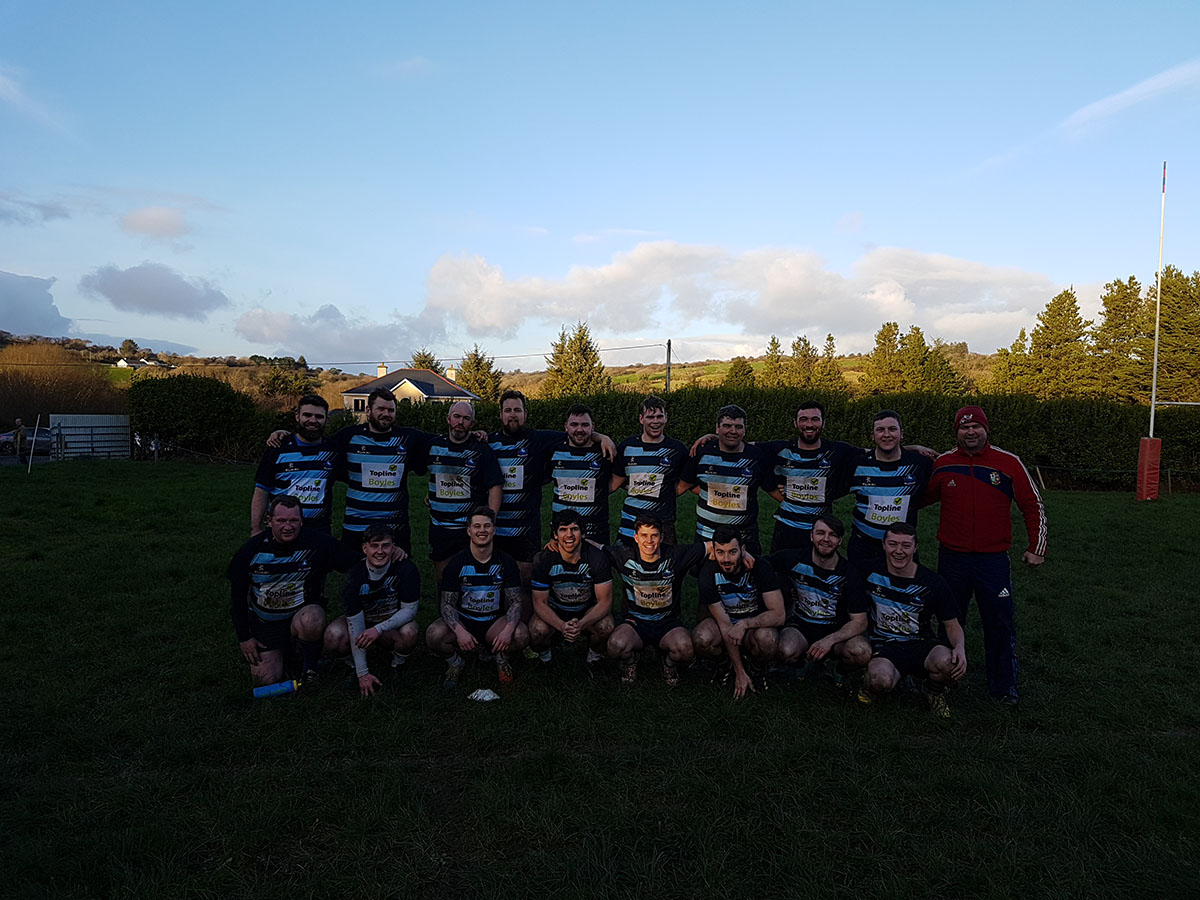