It was a very busy weekend for KRFC as nearly all teams were in action.

The U8’s and U10’s traveled back to Dingle on a beautiful day for rugby. The U8’s played some superb rugby, their coach Maddy commented that it was great to see things that had been practiced at training being used so well during the game. Chris who was captain for the day said the whole team really enjoyed the day. The U10’s had a difficult start to their game against an excellent Dingle team, they stuck to their task and came back strongly into the game. They displayed great teamwork which allowed them to score tries through Aaron, Alex and Adam. There were excellent carries by Zac, Alex, Luke and Rian. There was also great rucking and tackling by Joe, Dylan and Dan. Thanks to Chorca Dhuibhne for their hospitality and sportsmanship.

Saturday saw the U12’s travel west to the last pitch in Europe to play the last match of 4 against the Chorca Dhuibhne team.We had a full squad to play 18 players and 3 non players on the side line. The first half of the match was in Chorca Dhuibhne favor  with several try’s being run in on the down hill slope.In the second half Killorglin came back to score several try’s but it was not enough to win the game.The improvement by both teams was evident and ball skills and scrummaging has improved greatly during the season.The coaches have built up a good rapport after a day in Listowel last Saturday on the Safe Rugby Course. We still have our home Blitz to host on Saturday 25 March and the Pan Munster festival at Garryowen RFC on the 29 April.Once again thanks to our hosts for organizing the pitches and the food after, we are looking forward to next season U12’s as both clubs have plenty of players staying in the U12 age group.

The U14 West Muster Plate Final took place in Aghadoe last Saturday with Killorglin taking on Chorca Dhuibhne in what proved to be a very entertaining match played in great spirit.  The sun shone but pitch conditions were wet, which made for a slippy ball and uncertain footing, really testing the skills of the two teams.  Killorglin were first on the scoreboard when powerful running in the centre set up Donncha Crowley to go over for a try on the left wing, converted by Connor Spillane.  Chorca Dhuibhne soon struck back with fullback Caolan Ryan showing great footwork to beat several defenders and score a try from inside his own half. The conversion by Jimí Fenton put the scores level.  Killorglin pounded the opposing try line from the restart and Jack O’Brien looked as though he had touched down at the base of the post but the referees decision was held up.  The Killorglin set piece was dominant with both scrum and line out on top throughout the game.  This paid off when pressure from our pack pushed Chorca Dhuibhne back on their own scrum inside their 22 causing the ball to squirt out the side.  Aona O’Shea was quickest to react and looping round the back of the scrum headed for the line and then offloaded in the tackle to put Jack O’Brien in for the try.  Spillane’s conversion attempt came back off the upright.  When Chorca Dhuibhne had possession they spread the ball wide at every opportunity and stretched the Killorglin defense.  The line held firm but Killorglin were reduced to 14 players just before halftime when Conall Whelan was yellow carded for a high tackle.  Half time score Killorglin 12, Corca Dhuibhne 7.

After the turnaround Killorglin defended the remaining sin bin period with no concession and then went about stretching the lead.  Derry O’Sullivan’s direct drive to the line sucked in the defense, the supporting Whelan brothers combined for a quick and effective clear out and Aona O’Shea passed to Donncha Crowley.  Donncha still had a lot to do but he beat three or four tacklers and touched down under the posts for his second try and gave Connor Spillane an easy task with the conversion.  Throughout the game Chorca Dhuibhne looked dangerous with the ball in hand, but the result was put beyond doubt when pressure on the Chorca Dhuibhne scrum caused a rushed pass to their out half.  He fumbled the ball on his own try line and Aona O’Shea was once again on hand to pounce and touch down.  Corca Dhuibhne were not finished though, and Tadgh ó Murchú went over for their second try after a period of sustained attack.

Overall the winning of this game was in Killorglin’s set piece, defensive organisation, carrying power and breakdown work.  Centre partnership Darragh Mangan and James Byrne put in an immense display and big ball carriers in the forwards like Jack O’Brien, Jack O’Leary and Conall Whelan were also very effective.  Aona O’Shea drove the pack from scrum half and made a number of crucial plays.  Credit must go to our front row and lineout jumpers for providing a very solid platform and putting the opposition under pressure.  Chorca Dhuibhne really played their part in an exciting game that was in the balance until well into the second half.  In particular their tackling and passing of the ball was very good. We wish them all the best for the remainder of the season, just hopefully not against us. Thanks also to referee Fergal Courtney and to Killarney RFC for the use of their facilities. 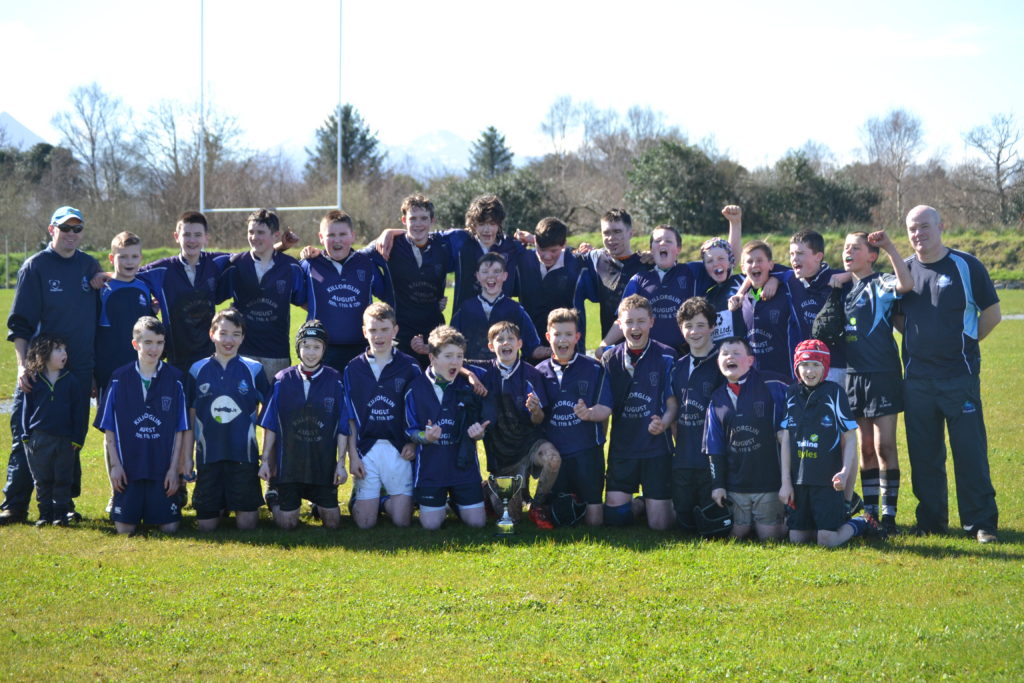 Under 18s played a challenge match v Listowel at Cromane on Saturday March 11th. Listowel traveled with 12 players so took 3 of our players on loan. The match was played in beautiful weather with great attacking rugby by both teams and less effective defenses! The final score was 32 – 29 in favour of the visitors assisted in no small way by Killorglin players helping their cause with knowledge of Killorglin tactics. Sadly, Daire O’sullivan suffered an injury that will sideline him for the rest of the season, we wish him a rapid recovery. Dazzling attacking play by Darragh O’Shea and Conchubhair Guiney produced some fine scores and good preparations made for forthcoming cup matches.

Our Seniors welcomed Bantry RFC to Ballymalis on Sunday for the first round on the Junior 1 Div 3 playoff. Killorglin dominated from the opening whistle, using great speed through the backs to open up the Bantry defensive line. Killorglin first got on the board from a well kicked penalty by Luke O’Shea and then they did not look back. The first try was an excellent team effort, it was nearly spoiled by a knock on but great hands from Brian Hayes as he juggled the ball and managed to get it to Rodi Healy who touched down under the posts. Brian Hayes then got a try of his own as he stripped the ball from the Bantry scrum half and did well to run in solo under the posts with Bantry nearly catching him in time. Tries then followed by Liam Foley and rookie Kyle Byrne which was his first senior try. 2 long range penalties from Luke O’Shea left the scoreline at half time 37- 0 to Killorglin. The second half saw more of the same when Craig Bainbridge opened the scoring with his first try in the a Killorglin jersey, Rodi ran in his second from halfway and Ben Bradley had a great interception to run in his second try of the year. Bantry managed a late try and a conversion to leave the final score at Killorglin 56 Bantry 7.

The second round of the playoffs will see Killorglin welcome Fethard & District to Ballymalis on Sunday March 26th. KO is at 2pm, it would be great to have a big home crowd to cheer on the lads. 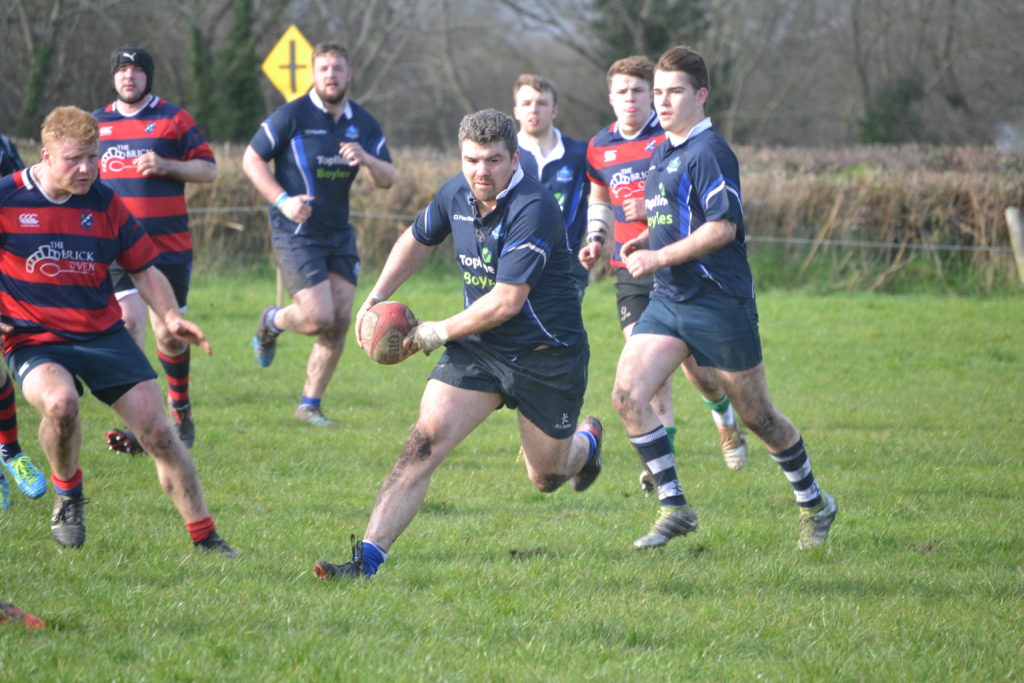